Lady GaGa For Supreme
Back to articles

Just under a year ago I was fortunate enough to be shown exclusive images from a Terry Richardson shoot with Lady GaGa for Supreme.

My friends at Supreme showed me the photos under strict instruction not to be show, shared or discussed with anyone. Having held on to this secret for so long it was a nice relief to finally see these pictures become published a few days ago.

I was originally pretty surprised at the rawness of this shoot but then again what do you expect from legendary sleazebag photographer Terry Richardson! I guess it was only shocking considering its subject is currently the world's biggest pop princess.

The shoot reveals GaGa rocking the classic Supreme box tee in a homage to cheesy wet t-shirt contests, strutting around wearing nothing but a Supreme skateboard with fire red Alexander McQueen Armadillo shoes and an edgy bondage style pose wearing ripped tights with a Supreme customized Hermès Birkin bag (prices start at $8000+ if you're interested) in her mouth. All shot in Terry's signature over-exposed style.

Haters will instantly jump on this project saying "Why are Supreme working with pop stars?" etc. but GaGa has been a big player on the Lower East Side scene for many years so is completely relevant to Supreme's downtown heritage. Also, Supreme do what they want so why not? This just takes them to yet another level above anyone else in the game, nuff said.

I'm not at liberty to say Whether Supreme are going to use these images on one of their own upcoming projects but in the mean time you can view the shoot in the current issue of Parisian fashion bible PURPLE magazine. 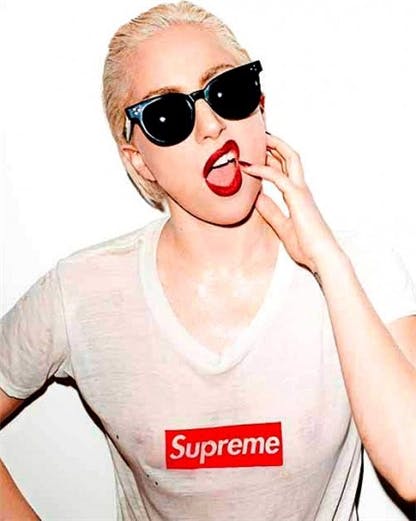 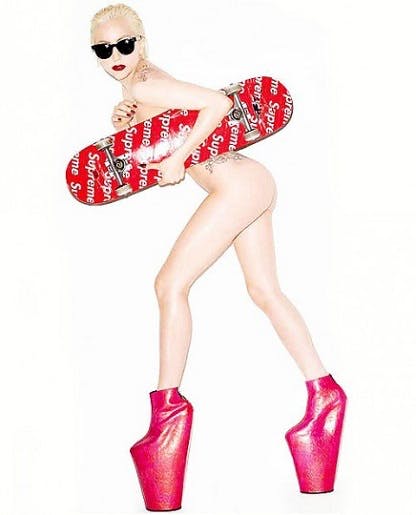 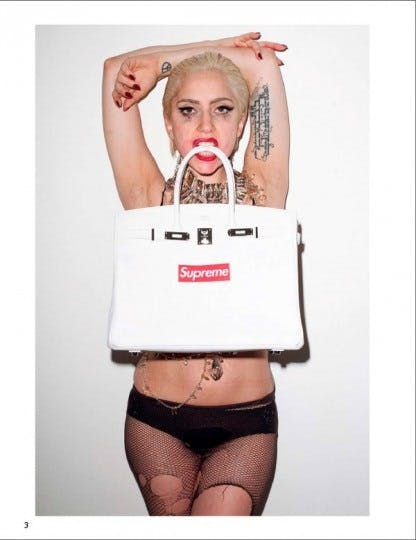 Lady GaGa's new single "Born This Way" will be released this weekend and Supreme's S/S11 Collection will launch within the upcoming weeks.