We Are The In Crowd : Route One Magazine Exclusive
Back to articles

We Are The In Crowd : Route One Magazine Exclusive 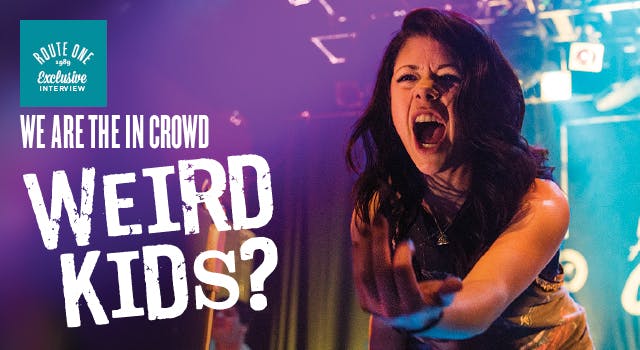 It’s funny who you meet in random places. Last November, I was on a flight from London to New York and ended up sitting next to Taylor Jardine, lead vocalist for US pop punk quintet We Are The In Crowd.

During the seven-hour flight, we chatted about various random topics including designing leather jackets for Glamour Kills, European pastries and British humour (she had just watched Simon Pegg’s “The World’s End” to much confusion). Tay informed me her band would be touring the UK in February 2014, to launch their highly anticipated second album “Weird Kids”, and that we should hook up an interview for Route One Magazine.

Fast forward three months and we’re sitting in the sumptuous red cocktail bar upstairs at London’s famous Koko venue a few hours before W.A.T.I.C’s largest UK headline show to date. Tay is getting her portraits shot in a variety of Route One sweats and beanies (“this is SO cozy, just what I need!”) but strangely quiet. Unfortunately the savage British winter has taken it’s toll on the 24-year-old singer and her touring schedule has been hit by severe illness (“Sorry, I feel like s**t dude”). This means a doctor-imposed pre-show “voice rest” so band management have condensed our scheduled hour together down to just ten minutes. These things do happen sometimes and it’s always better to have a shorter interview than to let down a couple of thousand fans, many of whom have been standing in the rain for up to nine hours outside the venue.

Do you feel that coming from such a tiny place like Liberty was a main reason for you wanting to break out? That was at first the only reason, yes. Living in such a small town, I wanted nothing more than to get out and see what the world had to offer me.

When your Myspace account got hacked back in 2009 (by an ex-band member who deleted all their music) did you feel like the band was doomed before you’d really begun? Yeah. I mean, at the time that felt like the worst thing that could have happened to us. Especially since Myspace was the only social media we had to connect with our fans back then.

But this brought you to the attention of Hopeless Records though right? Exactly, so ultimately it was a blessing in disguise!

Then things happened pretty quickly – you signed to Hopeless then got put straight on the Warped Tour. Yes, we began touring right away.

When you started did you get all the lazy comparisons to Paramore simply because you’re a girl fronting a band of guys?  Of course, but I’m sure Paramore got compared to No Doubt and Avril. These are comparisons we knew would happen but I think ultimately are complimentary. Bands such as Paramore have paved a path for bands like us and we have them to thank for that.

How do you feel about being labelled “Pop Punk”? I’m not sure what any titled genre means anymore. There are too many definitions to each label these days!

After your first album was so well received was there added pressure when writing and recording “Weird Kids”? There actually wasn’t. And I think we made sure of that by going into the record without any crazy standards. All we knew is that at that moment we wanted to create an album that reflected our highest capabilities at this time.

I heard John Feldmann helped push you to open up more with your lyrics for this album... Yes he did. It was a very good thing for me.

Listening to your album it feels obvious that you’re just as influenced equally by pop music as punk/rock - do you have a pretty open mind when it comes to the music you listen to and are influenced by? Absolutely - we listen to anything from Pop hits like Pink and Katy Perry, to Rancid to Foo Fighters to Nu Metal hits, haha.

A lot of America alternative bands break in the UK first. Was that the case for W.A.T.I.C? Yes, we were definitely better off in the UK at first than we were at home. It’s very welcoming.

How have the crowds been on this UK tour? They have been amazing. They make me eager for more!

Despite feeling really sick and the weather being shitty, what have you guys enjoyed about being over here in the UK? The fans! How could we not enjoy our fans - their energy made me forget I was sick on stage every night.

Do you have a bunch of UK/European festival appearances booked this summer? We are looking into many things this summer but we are not 100% sure yet so keep your eyes out! We’ll definitely be busy.

Thanks again for your time Tay. Do you have any final words for the Route One readers… I can’t believe I met you on a plane and now we’re here – that’s so cool!

Thanks to everyone for reading, and I hope to see you all soon! Our new record “Weird Kids” is out now if you’d like to check it out then head over to iTunes!