Go Skateboarding Day
Back to articles 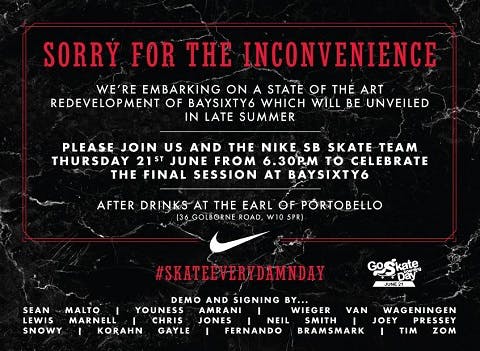 Today, Thursday 21st June, Nike UK will join a global community in celebrating Go Skateboarding Day with the Nike Skateboarding team passing though London to hit up some iconic skate spots before a free public demo at Bay Sixty6.

The event will also mark the final skate session at Bay Sixty6 as we know it, as Nike say âSorry For The Inconvenienceâ, close the doors and embark on a state-of-the-art redevelopment of the park.

To commemorate the annual celebrations, the global Nike Skateboarding team, including Sean Malto, Youness Amrani, Lewis Marnell and Wieger Van Wageningen, alongside Fernando Bramsmark, Tim Zom, Chris Jones, Neil Smith, Daniel Kinloch, Joey Pressey and Korahn Gayle plan to get London skateboarding and honour one of the most authentic activities in the world.

Throughout the day, come rain or shine, the team will take in some of Londonâs classic skate spots, from the Southbank to Stockwell, before heading to Bay Sixty6 for a signing session and the final demo at the existing park.

To follow the action, or even better, come and join these sessions, Londonâs skateboarders will have to follow Nike Skateboarding on Twitter and Instagram for clues and updates about when and where they will be.

To mark the occasion Bay Sixty6 will also have free entry all day for the public to skate their own personal, final session before meeting the Nike Skateboarding team and skating alongside them in between demos.

During the renovation, the public will be able to keep track of progress but also take a look back at the history and heritage of the notorious Bay 66 on their new Facebook page www.facebook.com/BaySixty6

Check out the R1 Blog next week for a full report and video of today's events.